The intestinal epithelium is the fastest renewing tissue in mammals, requiring a high activity of stem cells. The activation of proliferation of stem cells is regulated by the Wnt signaling pathway. Wnt ligand binds to the frizzled (Fz) receptor at the plasma membrane inducing a signaling cascade leading to the activation of specific target genes involved in cell proliferation. We identified RNF43, an E3-ubiquitin ligase uniquely expressed in crypt based columnar (CBC) stem cells. Deletion of the RNF43 gene results in exponential growth of the intestinal stem cells causing adenomas, a pre stage of intestinal cancer. Expression of RNF43 in HEK293T cells results in a downregulation of frizzled receptors on the cell surface.1 In this study we investigated how RNF43 regulates the cell surface expression of frizzled receptors by making use of the SNAP-tag technology from New England BioLabs.

The SNAP-tag labeling system starts with the cloning of a Fz-receptor-SNAP fusion protein. N-terminal SNAP-tagged mature mouse frizzled 5 (Fz5) (Ala27-Val559) was generated by PCR-subcloning SNAP from pSNAPf (NEB #N9183S) between mouse H2-Kb signal sequence and Fz5. To express SNAP-Fz5 receptor in cells, HEK293T cells were cultured and grown on laminin-coated glass coverslips and transfected with 0.5 μg SNAP-Fz5 using FuGENE 6 for 20 hrs at 37°C, 5% CO2. SNAP-Fz5 will be inserted into the plasma membrane with the SNAP-tag in its extracellular domain and can then be labeled with a SNAP-tag substrate of choice, which covalently binds the SNAP-tag. Here we used a fluorescent cell impermeable substrate making us able to specifically visualize the membrane pool of Fz-receptors. To follow the internalization of Fz-receptors in time, a pulse-chase experiment was performed (Fig 1): Cells were labeled with 1 μM SNAP–Surface 549 (NEB #S9112S) for 15 min at room temperature. After the pulse, cells were washed to remove unbound label. Subsequently, cells were chased for 15 or 60 min at 37°C. Cells were fixed and analyzed using confocal microscopy. The SNAP-tag technology provides us with a unique approach to monitor the trafficking of Fz-receptors.

Figure 1: Schematic representation of the pulse-chase experiment to visualize internalization of frizzled.

To investigate the mechanism by which RNF43 affects the subcellular distribution of frizzled proteins, we expressed a functional SNAP-Fz5 in HEK293T cells with or without co-expression of RNF43. We then used a pulse-chase experiment to follow the internalization of SNAP-Fz5 in time. In cells without RNF43 we see a stable localization of Fz5 at the cell surface (Fig 2a-c). However, upon co-expression of RNF43, Fz5 is rapidly internalized (Fig 2d-f ). We conclude that RNF43 negatively regulates Wnt signaling by promoting internalization of the frizzled receptor thereby making it unavailable for Wnt ligand binding at the cell surface. 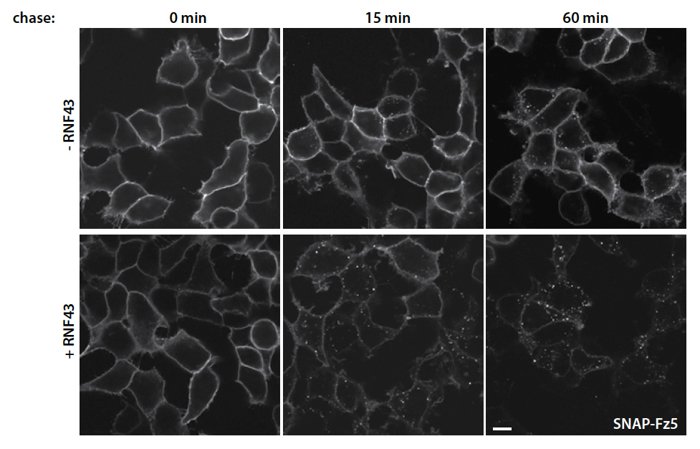 Figure 2: Subcellular localization of SNAP-Fz5 in HEK293T cells co-transfected with control or RNF43 cDNA. Surface SNAP-Fz5 was labeled with SNAP–Surface 549 for 15 min and chased for 15 and 60 min. Co-expression of RNF43 induces rapid internalization of SNAP-Fz5. Scale bar 10 µM.

Regulation of stem cell proliferation in the small intestine is important to prevent uncontrolled cell growth, which can lead to intestinal cancer. RNF43 is an E3-ubiquitin ligase which is found to be exclusively expressed in CBC stem cells, where it negatively regulates the Wnt pathway by reducing the surface expression of frizzled.1 The SNAP-tag technology from New England BioLabs enabled us to solve the mechanism by which RNF43 regulates frizzled receptor expression on the cell surface. By using the cell impermeable SNAP-Surface 549 substrate we were able to label SNAP-Fz5 exclusively on the cell surface. With this approach we could discriminate between the extracellular and intracellular pool of frizzled receptors allowing us to follow the internalization of these receptors in time. After co-expression of the ubiquitin E3-ligase RNF43 we found an increase in frizzled internalization. We propose that RNF43 acts as a tumor suppressor in the intestine by inhibiting Wnt signaling in stem cells.