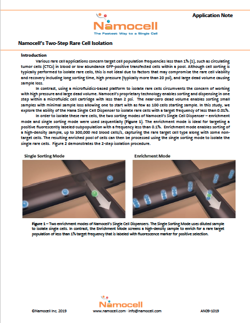 Rare cell isolation can be very challenging using conventional cell isolation methods when the target cell population frequencies are less than 1% such as circulating tumor cells (CTCs) in blood or low transfected GFP-positive cells within a pool. Although cell sorting is typically performed to isolate rare cells, this is not ideal due to factors that may compromise the rare cell viability and recovery including long sorting time, high pressure (typically more than 20 psi), and large dead volume.

In contrast, using a microfluidics-based platform to isolate rare cells circumvents the concern of working with high pressure and large dead volume. Namocell’s proprietary technology enables sorting and dispensing in one step within a microfluidic cell cartridge with less than 2 psi. As a result, there is near-zero dead volume that enables sorting a minimum input of 100 cells. In this study, we explore the ability of the Hana Single Cell Dispenser to isolate rare cells with a target frequency of less than 0.01%. Request the app note to see how Namocell’s Single Cell Dispensers can be used to enrich and then isolate rare cells.